I imagine time like an arch from here and now in 2021 reaching back to Japan in the late eighteenth century.

The moon shines down into artist Kitagawa Utamaro’s studio in Edo, modern day Tokyo. It’s late and he is at last satisfied with the final drawing of what will become a tryptic called Women on the Ryogoku Bridge.

He has drawn three women-in-waiting from a local feudal lord’s palace wearing curved, pale head-dresses called age-boshi as they look down into the Sumida River. On the other side are geishas- a class of female entertainers leaning casually towards each other exchanging gossip, their hair held in fastidious waves with long pins.

All the figures on the bridge are curiously tall, the women’s necks long like the throats of birds.

Tomorrow, Utamaro will take his drawing to a wood carver.

The fine paper will be stuck down on to a block of smooth cherry wood and carefully following the artist’s lines, the carver will chase away curls of wood to create a negative of the original work.

After brushing the engraved image with black ink, next, a printer will lay down dampened kozo paper made from mulberry trees on to the block.

Taking a barren- a flat disc made from paper layers held with bamboo, the printer will describe evenly pressured circles over the block. Finally, gently pulling back a corner of the kozo paper, he will reveal the very first print from Utamaro’s drawing by this- the magical process of wood engraving.

And here is a curious synchronicity: at the same time as Utamaro observed the hedonistic middle class of Japanese society in Edo, across the other side of the world in the polite rural England of 1795, Jane Austen begins to write Elinor and Marianne later revised into Sense and Sensibility.

Borrowing from Utamaro’s Women on the Ryogoku Bridge, I transposed the design to a Chinese style bridge over the Kennet and Avon Canal in Sydney Gardens, Bath-  richly coloured kimonos becoming the romantic dresses of the Georgian period.

This imaginary summer meeting of society women, nursemaids mistresses and a penguin is called Oh! Mr Darcy!- a nod towards the unforgettable BBC production of Pride and Prejudice in 1995 starring Colin Firth as the novel’s proud, elusive hero. 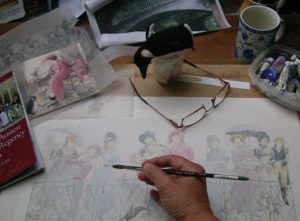 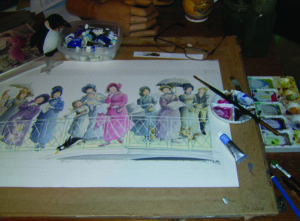 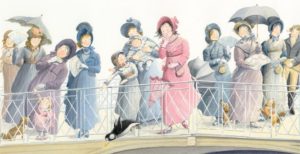 The Higher the Hair…

From Bath with Jane Austen and the Penguin